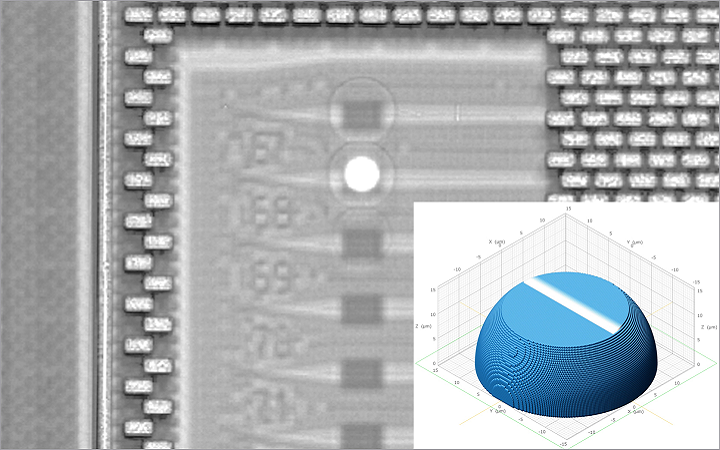 While 3D printing is capable of fabricating large objects, bigger isn’t always better in this industry…a notion that Nanoscribe is very familiar with. The German 3D printer manufacturer is an expert in 3D microprinting, and earlier this year participated in two studies that utilized its Photonic Professional GT 3D printer to illustrate just how practical 3D printed micro-objects can be. Now, the company is using its high-resolution technology to 3D print and integrate microscopic components directly on integrated circuits and chips.

At the moment, you need different manufacturing methods and multiple process steps in order to produce photonic circuits and microelectromechanical systems (MEMS) for microchips. But thanks to Nanoscribe’s technology, which uses a two-photon polymerization process, it’s possible to 3D print objects with complex geometry at sizes from just hundreds of nanometers to several millimeters.

Snapshot of the 3D printing process of a hemispherical lens on a chip. Inset: Print simulation of the 3D component.

Integrating microscopic components into photonic and MEMS systems is a major challenge in the manufacturing and packaging industries, as more and more functional parts have to be accommodated in increasingly smaller spaces. By 3D printing micro-parts in situ exactly where they need to go on integrated circuits, like micro-lenses, and deformable structures on MEMS actuators, companies can save on both calibration time and equipment packaging costs, and new commercial applications, like high-speed data transfer and telecommunication to mobile devices for healthcare, can open up.

Optical microscope image of the 3D printed hemispherical lenses on a photonic chip.

Nanoscribe’s 3D printer, with its precision optics and advanced software tools, can produce 3D polymer structures with submicron precision in a single step. In its two-photon polymerization process, a laser exposes a photosensitive resin in a controlled trajectory with a high-numerical aperture objective. The material then solidifies only in the laser focus spot, which allows for nearly arbitrary 3D structures with tiny features at a scale not possible before now. The technology allows for many print surfaces, including pre-patterned chips, which makes the miniaturization of 3D printed functional parts into integrated circuits possible.

In directly 3D printing micro-lenses onto photonic chips for the first time, a series of hemispherical micro-lenses were fabricated with laser accuracy on top of grating couplers that had been previously patterned on a chip, so an array of micro-lenses can couple light into the circuit. Once completed, the 3D printed micro-optics, which meet the necessary high-performance requirements, did not have to be aligned or mechanically mounted into the pre-structured microchip, and the technology means that users can avoid curing-based fixing procedures and pick and place fabrication.

Several applications in the healthcare field, such as tissue regeneration and medical imaging, can benefit from direct 3D printing of integrated circuits onto chips. One recent example is a project by a research team from Nanoscribe customer Boston University, headed up by Professor Alice White.

The team utilized Nanoscribe’s technology to 3D print deformable, stretchy structures resembling bow ties directly onto MEMS actuators. By applying a voltage to an actuator, the researchers were able to deform the 3D printed microstructures.

“We show that coupling 3D microprinting with MEMS actuators is a powerful way to produce 3D micromechanical systems tailored to specific needs,” explained Professor White. “Nanoscribe 3D printers allow us rapid prototyping of submicron-resolution structures that would otherwise be impossible to fabricate via single-photon stereo-lithography or the deposition and etching processes commonly used in semiconductor foundries.”

These results, based on the dynamic actuation of the 3D printed microstructures, could find several applications in the medical field, like tissue engineering scaffolds and deformable optics.

Discuss this story and other 3D printing topics at 3DPrintBoard.com or share your thoughts in the Facebook comments below.